Berto and Mundo, our tuxedo boys,  came to us after the recent hurricane, Maria,  swept over Puerto Rico.
A gallant group of rescuers swept up unclaimed at-risk dogs and cats and brought them to Maine one at a time
Mundo (Raymundo, with the pink nose) arrived first and quickly settled in.
Delays in transport kept Berto (Roberto, with the black nose) in PR for another month
so his brother didn't remember him, at first. But about an hour later all memory returned and the boys
became inseperable, once again

We discovered Hermione on January first when we went out to our woodshed at night to get logs for the stove.
It was -20 F out there.  As we did we heard a little squeek.  This kitty found us and was starving and injured. We brought her in and fed her.
It was then that we noticed her frost-bitten left ear and partly missing and badly injured tail, probably from attempted predation.  Our wonderful animal control
officer carried her to the Harvest Hills Animal Shelter for quarantine, surgery on her tail and ear, micro chipping.  We asked for first dibs on adoption if unclaimed
Over the week they tried to find her owner via their website, but nobody responded.  It's hard to believe because she's a beautiful tortoiseshell part Maine Coon.
Sooo ... Hermione is now in our household and gets along well with the boys (see above picture).

The photo below shows Hermione the eve we found her, before surgery on her ear and damaged tail.

She is what we in Maine call "a real lookah"


MIKKI, MINOU, AND PENNY (BELOW) 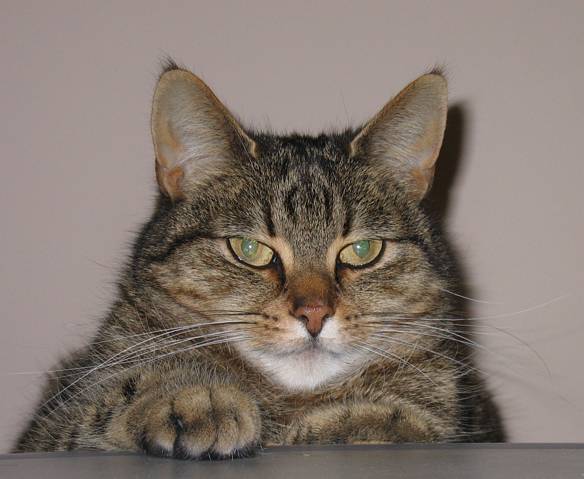 
Sadly, our friend Mikki has passed away after a long illness
and a mere ten years as a member of our family.

A few months after Mikki's death, a neighbor told us about a lady who had died and left a kitty that needed adoption.

So we ran over and grabbed her up and took her home.

Penny is about 8 years old and has spent her life in a small trailer with no other kitties.

She is very playful and inquisitive and likes people,

AND she's a little bit of a toughie

Sooo. . . she doesn't get along with Minou and the result is that we now have an upstairs cat, Minou

and a downstairs cat, Penny.

Unfortuately, both Penny and Minuo are no longer alive

at our house in Brussels

THEY WERE REALLY WORRIED ABOUT STAYING WITH US

AND SPENT MOST OF THEIR TIME HIDING

THEN, AFTER ABOUT TWO WEEKS, THEY BECAME MORE VISIBLE,
BUT STILL A LITTLE WORRIED

AND NOW, THREE WEEKS LATER THEY OWN THE PLACE

MINOU (ABOVE, ON THE LEFT) IS A GIRL
HER STRIPES ARE FINER AND SHE APPEARS LIGHTER
AND
MIKKI (ON THE RIGHT) IS A BOY
HIS STRIPES ARE BLACK AND WIDE SO HE APPEARS DARKER

THEY SPEND MOST OF THEIR WAKING HOURS PLAYING

AND NAPPING UNDER THE WATCHFUL EYE OF SYBIL


and now for a perfect rectangle

It's now about ten years later and they are still wonderful kitties.

So here are a few more recent photos of Mikki and Minou plus Vish, tootsie, and Lewnes.